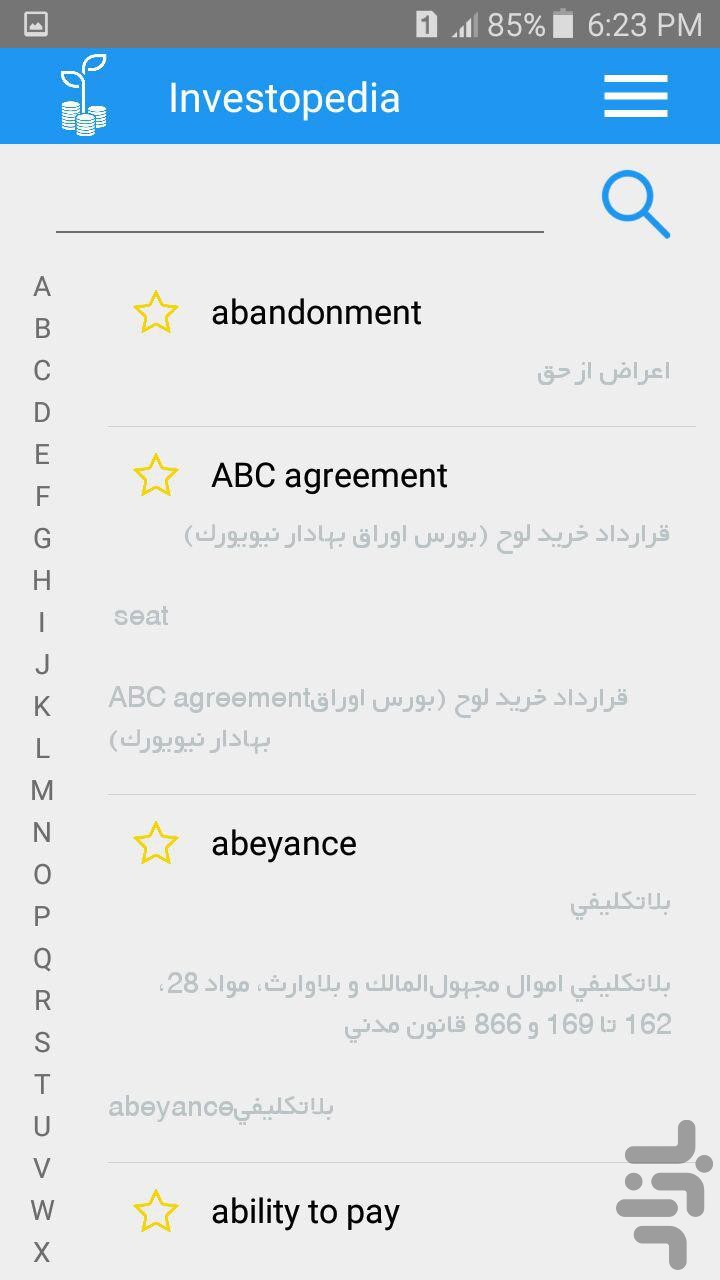 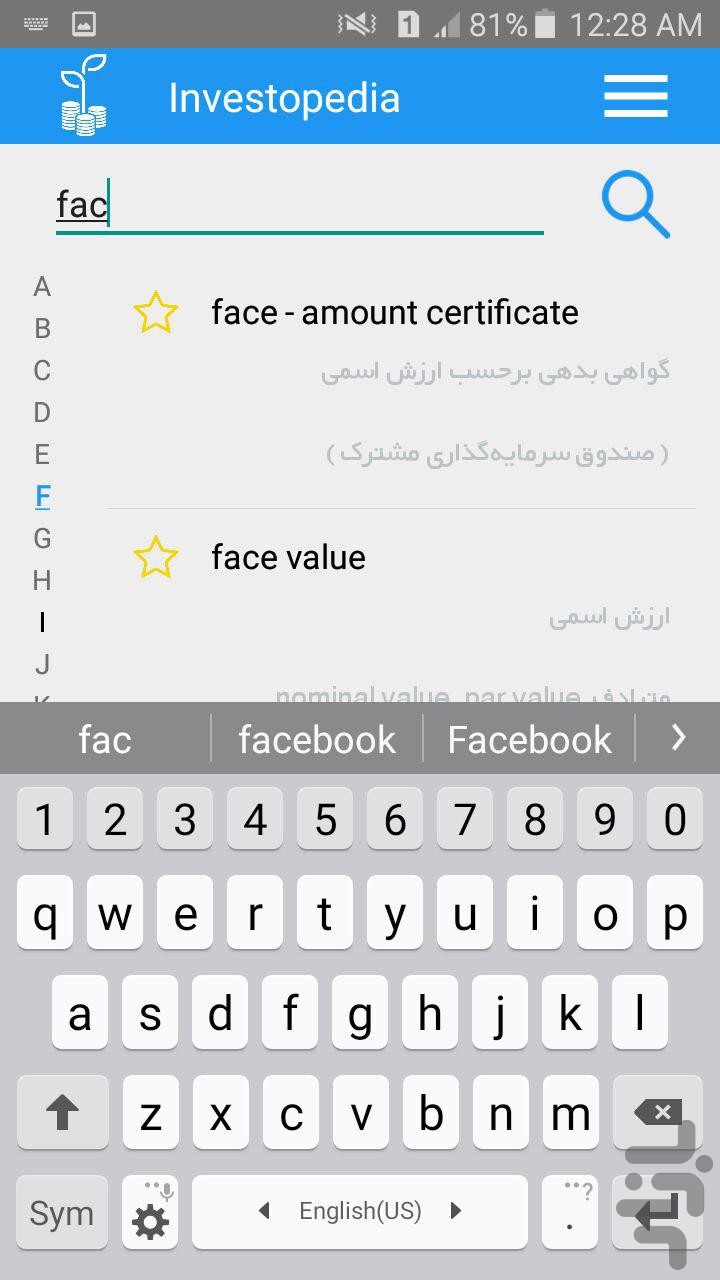 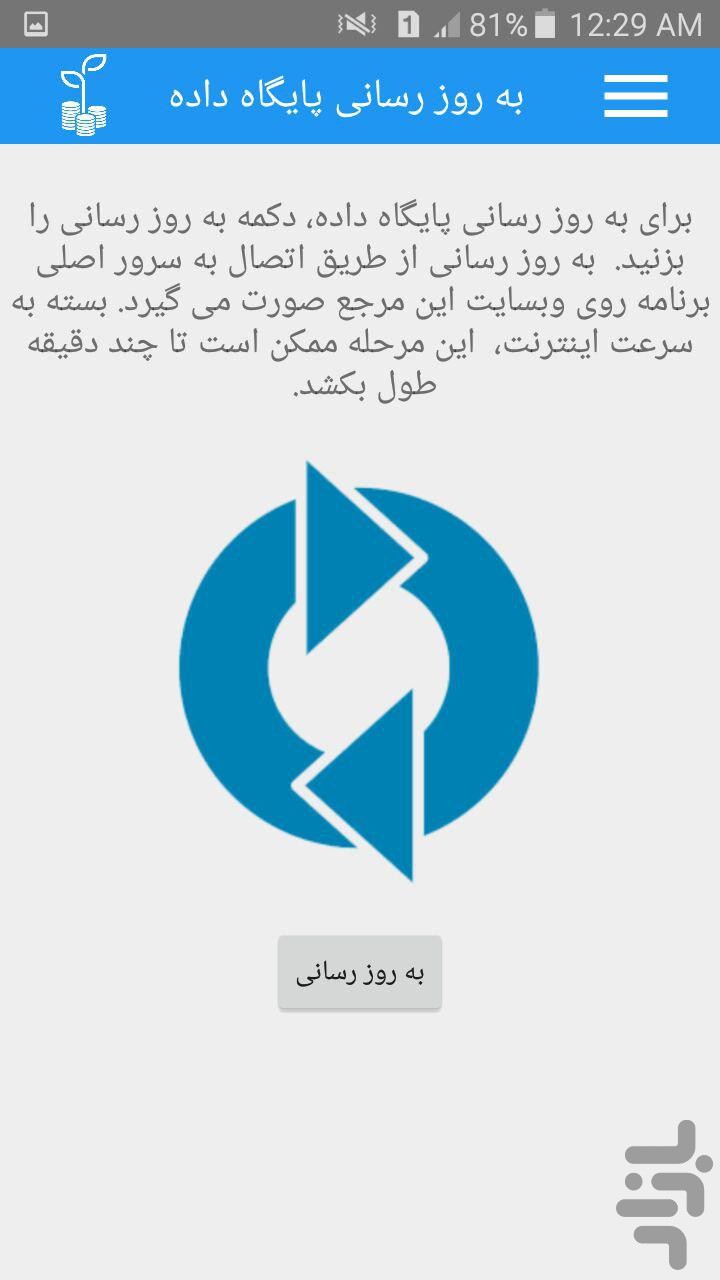 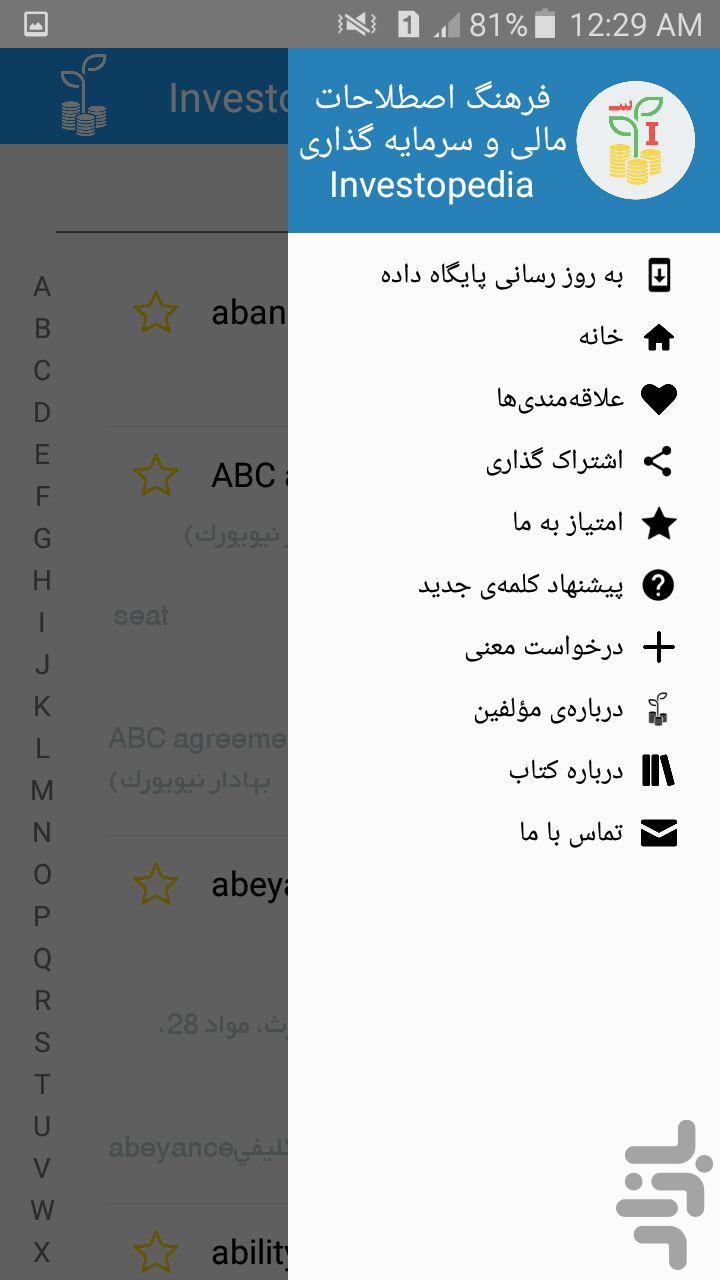 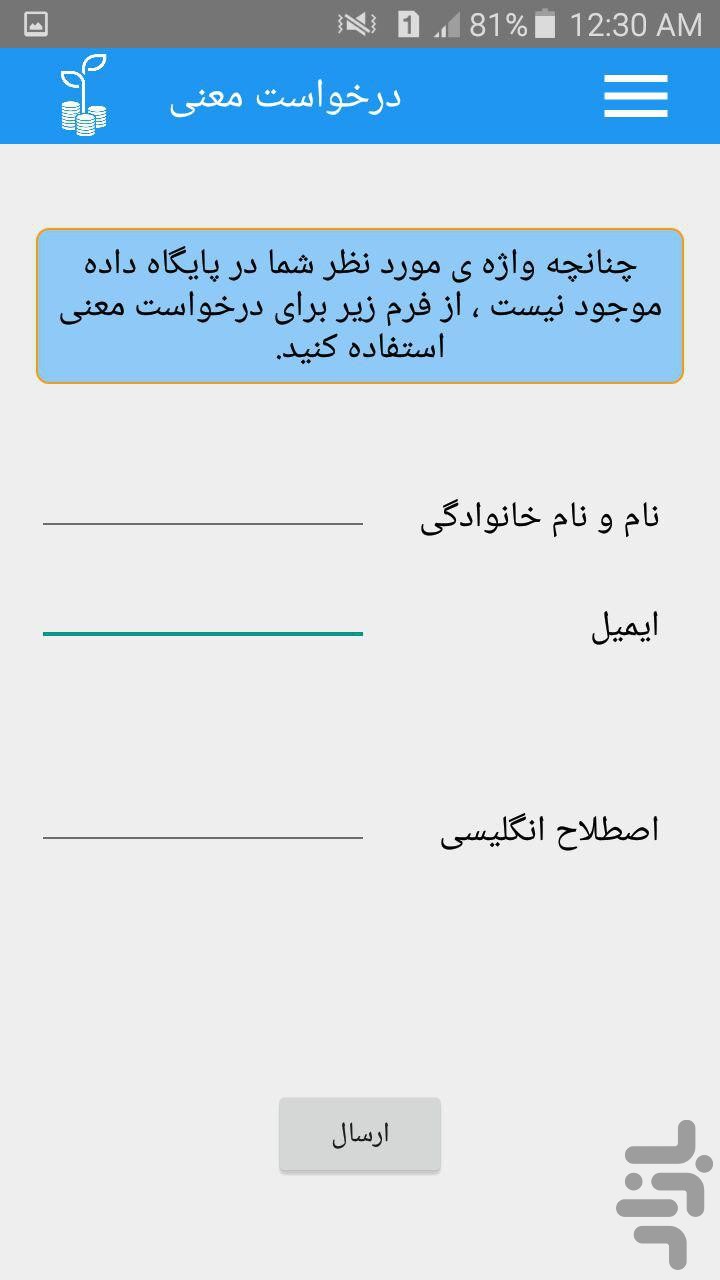 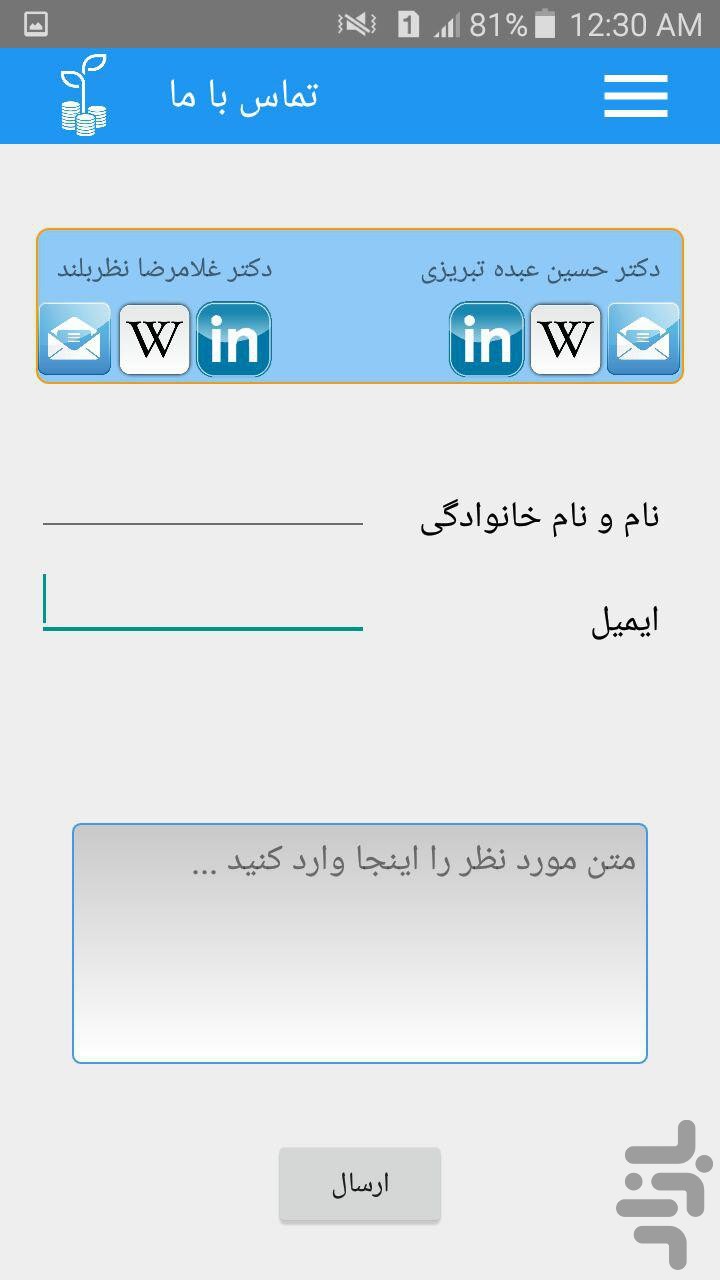 This English-Persian Dictionary of Finance and Investment Terms contains about 5000 entries. Though some terms defined briefly, at this stage, it is only a lexicon; i.e; a book of financial and investment words in English with their equivalents in Persian.

If the authors can afford to spare time and energy required for such an immense undertaking, they will hopefully later produce a dictionary with definitions of terms and short articles on selected topics. Although clearly written for people active in the financial markets, the dictionary includes a rich content for the wider audience of financial students and learners, the translators, interpreters and people in the industry. It is prepared for all Persian speaking communities, including those born in Iran, Afghanistan and Tajikistan.

For each English term in this bilingual specialized English-Persian dictionary, only one equivalent Persian terms provided. If a term is used in different segments of the financial industry and may have a different meaning when used in various contexts, alternative Persian equivalents are offered. Where the term involves several meanings, it may be a composite of reference to two or more Persian equivalents rather than a reference to single Persian word.

Although the proposed Persian terminologies are not officially adopted by any Iranian authorities, but the authors have preferred to give priority to the Persian equivalents used in the text of regulations, even if considered inferior to their own favorite terms. Where there were Persian terms representing the consensus of industry professionals, the authors have applied them with almost no exception.

To find proper Persian equivalents for English Phrasal Verb in this specialized bilingual English-Persian financial dictionary has been specifically a difficult task. We have tried to deal with the difficulty of EPVs and work them out individually and create Persian equivalents for them which we hope to be accurate enough. This was preferable to skip over these words.

The beginnings of this book go back over five years. It was the year 2006 when Gholamreza Nazarboland and Hossein Abdoh Tabrizi met Iranian Stock Exchange regulators to discuss setting up Persian financial dictionary based on Barron's Dictionary of Finance and Investment Terms. Although the talks produced no tangible results, Dr. Nazarboland from the same day on continued to collect materials for the book alone. His role in creation of this book is just far too unique that singles him out as the major draftsman of the work, In case of Dr. Abdoh, it was only in the last year of the work that the author devoted his time and energy to the dictionary's compilation.

When the two authors undertook to work on the book Abdollah Kowsari agreed to assist in reading the book for an improvement in equivalent Persian terms. In the event, over the years, he has helped the book immensely as a collaborator responsible for many improvements so far as to call him the third author.

The authors were well aware that there exited some books on the subject, and went through them carefully. Examining those dictionaries in Persian, although one could find that several performances on the same subject had already appeared in the market, but instead of exhibiting an enlarged and comprehensive view of the issue, those productions were imperfect, according to the very circumscribed plan which their authors had adopted. The authors of this book have endeavored, to the best of their judgments, to digest and methodize whatever appeared loose or inaccurate therein.