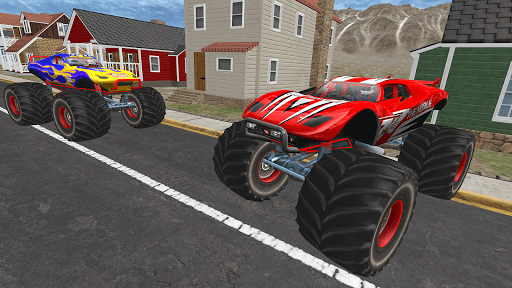 A wonderful Real Monster Truck Cop Chase Game for All. You are in a war with cop drivers!
Police cars are chasing the criminals, gangsters and bad crime mafia in the village. They are highly talented and well trained to down the heavy criminals who are destroying the concord of the village.
It’s police responsibility to bring peace again in the village and get rid of all the crime and Thief mafia that are trying to invade the cops’ cars vs monster truck city.
Crazy monsters are running here and there on their monster truck to fulfill the police car chasing mission, these crazy gangsters and fast monsters are escaping from the modern police chase drivers. These monster are involved in highly criminal activities in the village.
This is a real car vs monster truck chase game like you’ve never seen before – using pickup fast monster trucks on the terrain you’ll have to escape the police in the village and use all your moonstruck stunt and driving skill to escape crime from the cop for as far as possible.
Be the king of the high-speed monster truck riding and jumping. Challenge yourself in exotic super cops car and escape from police chasing in the spectacular village.
Play Real Monster Truck Cop Chase and police chasing and police cops games to be the part of the best plan game.
Drive multiple crazy monster truck vehicles while competing with an opponent’s police car. Control your Real Monster Truck with physics because heavy monster trucks to bounce, drift and tire slips as real driving!
The cops cars chasing speed increases with the time you need to avoid cops car smash by racing the big wheel fast monster truck and with fast speed. Monster police car chase kills drivers are equipped with fast demolishing vehicles that are ready for cops to chase car wars and smash at any time. Make it impossible to chase for cops cars with your police chasing games best monster truck driving skills.

The real monster trucks are many high-speed and powerful vehicles so that you don't get busted by cops chase. For police car driving chase Use the gas pedal, rails, and half-pipes to escape the police as they chase after you at high speeds.
Try to escape from heart-wrenching hurdles and police car in a maze of modern village streets. Show guts and speed monster stunts in this ultimate cops chase. Feel the lethal driving experience through racing craziest fast monster trucks to outburst the cops.
Real Monster Truck Cop Chase Game Features:
If you love to play car chase and escape 3D simulator latest games then play and drive speed monster stunts. You won’t regret to play this escape adventure of police chase 2019!